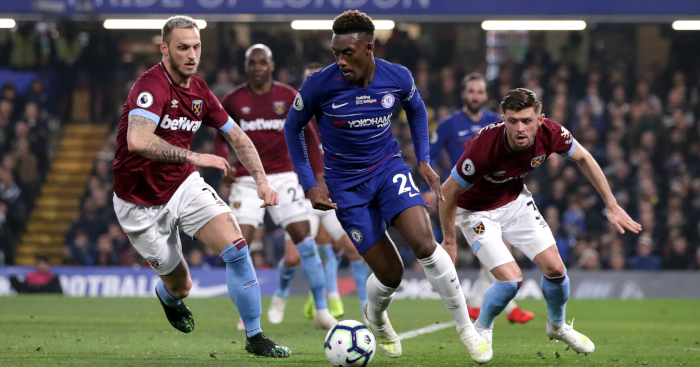 Pedro may have lost his place in Chelsea‘s starting XI to Callum Hudson-Odoi, but the forward was determined to ensure his younger team-mate was given the praise he deserved after the Blues beat West Ham 2-0 on Monday night.

Eden Hazard may have stolen the headlines with a magnificent opener before adding a second late on, but the win was also notable for Hudson-Odoi making a second consecutive start in the Premier League after forcing his way into Maurizio Sarri’s side.

The 18-year-old has enjoyed a meteoric rise in recent months and again impressed, almost scoring after a sublime pass from Hazard.

Sarri decided to replace Hudson-Odoi with Pedro for the final five minutes, and the Spaniard urged Chelsea’s fans to show their appreciation of the youngster’s display.

before coming on, Pedro asks the Chelsea fans to give Callum Hudson-Odoi a deserved ovation (not that it wasn't coming) and he responds in kind. love that. #CFC pic.twitter.com/uLL8AMi9nn