Watch: Pep Guardiola fumes during game then sarcastically thanks officials 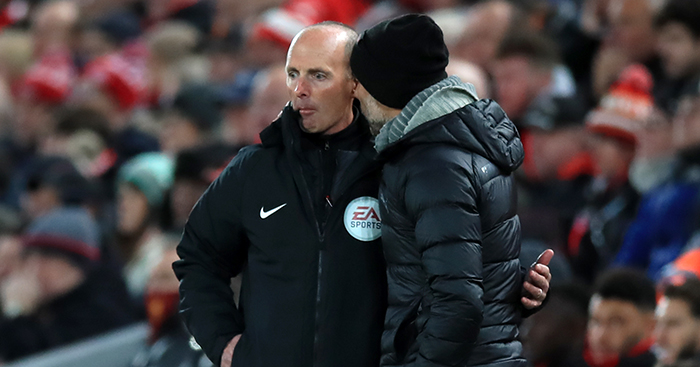 Manchester City were beaten 3-1 at Liverpool in the Premier League on Sunday – and it is fair to say Pep Guardiola was not happy with the officials.

Guardiola was not happy with the circumstances surrounding Liverpool’s opener, with Trent Alexander-Arnold handballing in the hosts’ box moments before it.

Replays showed Bernardo Silva had handballed first, but Guardiola clearly felt hard done by as his side were not only denied a penalty but also punished by a brilliant Fabinho goal just 21 seconds later as Liverpool broke down the other end.

Alexander-Arnold told Sky Sports afterwards: “Obviously, there’s VAR and it has hit my arm. I think it might have hit Bernardo Silva’s first.”

Pep Guardiola is still fuming with the officials about the VAR handball incident that lead to Fabinho's goal 😡 pic.twitter.com/mVS5PWsKeX

Then, after Salah and Mané’s goals, Bernardo Silva pulled one back for City 12 minutes from the end to give them a glimmer of hope going into the final stages.

And in the 83rd minute City argued for a second time they deserved a penalty, once again for an Alexander-Arnold handball in the box – but once again the appeals were waved away, leaving Guardiola fuming on the sidelines.

Pep Guardiola is not happy 😡

Guardiola thanked referee Michael Oliver and his assistants after the game, but when it was put to him in his post-match interview that it may have been sarcastic, the City boss replied: “No way, I congratulate them, it was polite”.

You can make up your own minds below.

Which mate is as sarcastic as Pep Guardiola? 🥶 pic.twitter.com/euFqju6mdv

City now go into the international break in fourth place, behind Leicester City and Chelsea, but Guardiola was full of praise for his team’s performance.

“What happened today we showed why we are champions,” he told Sky Sports. “I am so proud of my team, more than ever. We can be proud of how we played against the strongest team in Europe.

“Ask to the referees, don’t ask me. Ask to Mike Riley and the guys in VAR. I would like to talk about our performance, it was so good. It was one of the best performances we have played.

“We played like back-to-back champions. We cannot deny how good Liverpool are, but the way we played, the personality, it was good.

Comparing Liverpool and Man City’s PL records with every referee