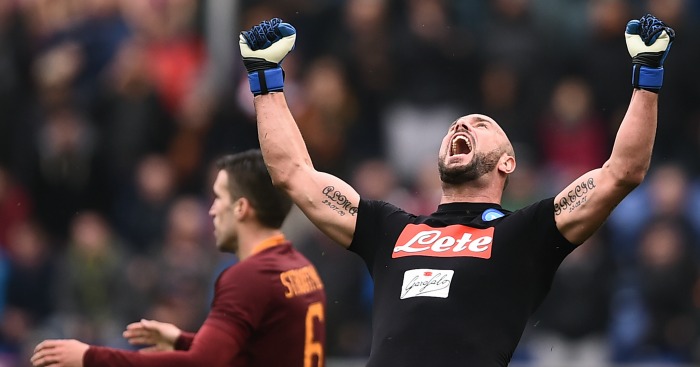 Dries Mertens may have scored a brace, but Pepe Reina was equally important as Napoli beat Roma 2-1 in Serie A on Saturday.

Belgium forward Mertens took his goal tally for the season to 22 in all competitions with both of Napoli’s goals at the Stadio Olimpico, but the hosts were made to endure a nervy finish after Kevin Strootman struck for the hosts in the 89th minute.

And with three of five added minutes played, Diego Perotti’s shot from the edge of the area was deflected, wrong-footing Reina in the Napoli goal.

But the former Liverpool man somehow managed to readjust and push the ball onto the bar before clearing with his feet to deny Antonio Rudiger a tap in.

Speaking after the match, Roma boss Luciano Spalletti admitted his side’s title challenge is as good as over, with Juventus now able to go 10 points clear at the top of the table.

He told Sky Sports Italia: “We must be realistic. It was difficult before, now it’s almost impossible.”