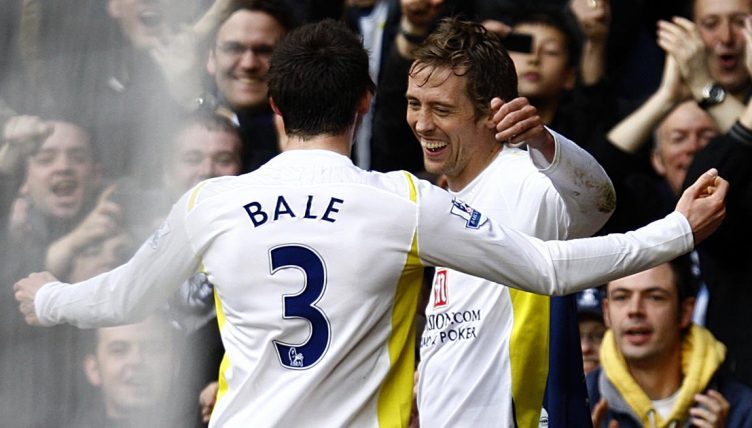 Peter Crouch has been reminiscing about his thrilling two years with Tottenham in a brilliant interview with UMM.

Crouch will forever be a hero to Spurs fans after scoring the goal that got them to the Champions League at the end of his first season in 2010 and then a memorable winner against AC Milan at the San Siro in his second year back at the club.

The striker was sold to Stoke early into the following season, but the former England man has plenty of good memories from his time at the club where he had started his career as a professional.

“When I was up top on my own and Van der Vaart was just in behind, we had Modric and Huddlestone, who was an underrated player, then on the wings we had Lennon and Bale. The pace was scary,” Crouch says.

“Ledley King…me and Ledley came through the youth team together. Ability-wise, for a centre-half, he was the most skilful in our youth team. It was crazy. Unbelievable player.”

There is perhaps one player in particular who will always be associated most with that Harry Redknapp team, though: Gareth Bale.

The Welshman had been playing at left-back and famously failed to taste victory in his first 22 Premier League games as a starter, but his fortunes began to change once the monkey was off his back, and Crouch says there was never any doubt within the dressing room that Bale would go on to achieve great things.

“He was going through a difficult time because he was playing left-back. I remember Harry pushing him further forward and that was the difference.

“It was like playing Cristiano (Ronaldo) right-back. Of course, he’s going to get done defensively, but in training, Bale was the best player every day and we knew it was coming and it was just a case of when.”

And Bale’s crescendo came in the Champions League against Inter when he scored a hat-trick in a 4-3 defeat at the San Siro and then put in an even better man-of-the-match performance in a 3-1 win against the Italians at White Hart Lane.

“When we played in the home match, all I had to do was keep up with him. I remember getting a tap-in from about two yards out and Bale absolutely destroyed Maicon that side.

“And there was another one for Pavlyuchenko’s goal. He had about 15 yards on a world-class defender (Maicon), pushed it past him, and just blitzed him. And do you know what he was getting back just as quick.

“It wasn’t just about his pace, it was about his energy as well. And that was the making of him. He’s a world-class player, Bale, but that season, watching that was incredible.”

Crouch also joked that he taught Harry Kane the art of goalscoring and set the record straight on famous photos of him with Andres Iniesta in a restaurant, as well as showing off his unorthodox putting style on the golf course.

Watch the brilliant interview in full below or over on the UMM YouTube page.