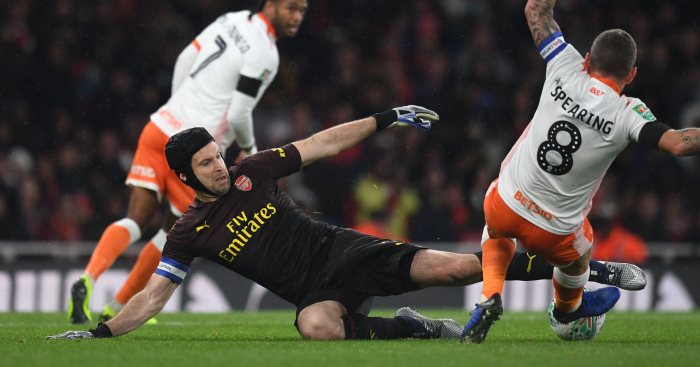 Petr Cech endured a nervy return to Arsenal‘s starting XI as the Gunners beat Blackpool 1-0 in the League Cup to set up a quarter-final clash with Tottenham.

The arrival of Bernd Leno in the summer cast doubts on Cech’s first-team future at Arsenal, but new manager Unai Emery kept faith with the veteran goalkeeper at the start of the season.

Former Chelsea hero Cech had a couple of shaky moments as he became accustomed to Emery’s preference to play out from the back, and an injury presented Leno with a chance to stake his claim for the No.1 spot.

Leno has looked assured in Cech’s place, but the 36-year-old was restored to the starting XI for the visit of Blackpool to the Emirates.

Arsenal triumphed 2-1 thanks to goals from Stephan Lichtsteiner and Emile Smith Rowe, while both sides had men sent off, but the hosts almost conceded an equaliser when Cech was robbed of possession inside his own area, only for Nathan Delfouneso to be flagged offside after he had put the ball in the back of the net.