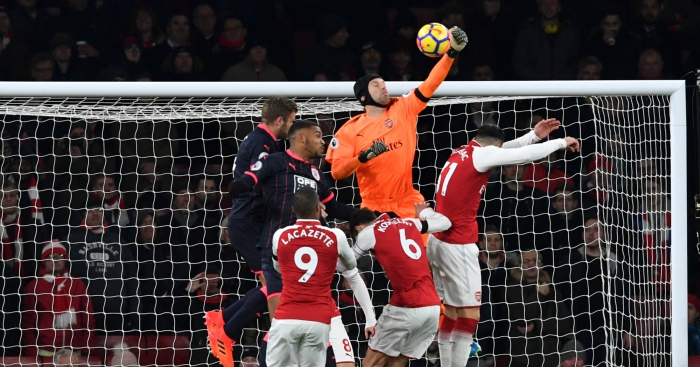 Arsenal may have enjoyed a pretty comfortable win over Huddersfield on Wednesday night, but Petr Cech did give the Emirates faithful one heart-in-the-mouth moment.

Alexandre Lacazette opened the scoring for Arsenal after just three minutes against Huddersfield in north London as the hosts ran out 5-0 winners.

Alexis Sanchez, Mesut Ozil and two goals from Olivier Giroud completed the scoring for Arsene Wenger’s men in a victory which leaves Arsenal fourth, two points ahead of fifth-placed Liverpool and four ahead of fierce rivals Tottenham.

But despite the emphatic scoreline, Cech threatened to make matters somewhat more tense with the score still at 1-0.

After a scramble in the box, the goalkeeper flapped at a deflected shot while facing his own goal, slapping the ball onto the crossbar in what could have been a seriously embarrassing moment for the experienced stopper.