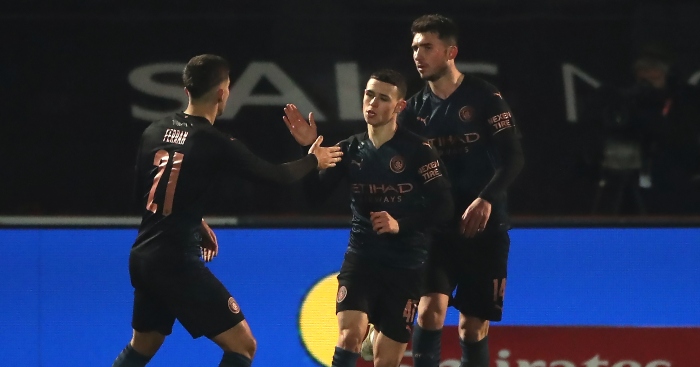 Phil Foden continued his impressive form with another brilliant performance in Manchester City‘s 3-1 win over Cheltenham.

Alfie May’s 59th-minute opener had put City on the brink of a humiliating FA Cup exit but Foden stepped up and dragged Pep Guardiola’s side into the next round.

The England international equalised in the 81st minute before Gabriel Jesus and Ferran Torres completed the comeback.

Foden also produced a brilliant solo run during the second half, driving into the box and leaving several Cheltenham players in his wake.

“I was lucky enough to play in the England team with Paul Gascoigne and Paul Scholes, two of the greatest midfielders around,” Alan Shearer said after the game.

“Some of the passing, the dribbling (is like) Gazza, the way he just guides past players. The close control.

“The way he handles the ball, his body position, his ability to pass it into the forwards. He’s so comfortable, the way he receives the ball. As a forward when you’re making runs you want someone who has that ability to find you.”