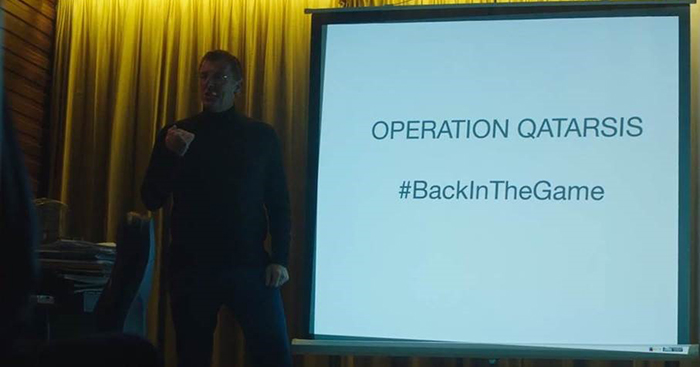 We thought the Paddy Power ‘Pundits’ sitcom might have peaked with ‘Curbs’ Cans’ in episode one…but then we saw Matt Le Tissier impersonating a vulture.

Last week we watched Le Tissier, Phil Thompson and Charlie Nicholas trying to adapt to life after Soccer Saturday by launching their own version of the iconic show, hosted by Alan Curbishley, our new favourite person in the world.

If you haven’t already seen it, go and watch it right now. Curbishley is genuinely hilarious in it.

He’s brilliant in the latest episode, too – him revealing his OnlyFans profile to Thompson is a particular highlight – but this week it’s unquestionably Le Tissier who steals the show.

At the end of episode one we discovered the quartet had landed themselves an interview for some punditry work in Qatar, and this week we see Le Tissier, the youngest of the four, not to mention the only one of them with half a million Twitter followers, prepping the other lads for a changing world with an Apple-style keynote speech: “Hashtags. Bebo. OnlyFans”.

The Southampton legend’s TikTok tutorial is ridiculous enough, but the highlight for us undoubtedly comes when Le Tissier puts Thompson and Curbishley to the test with a series of questions while they play a wire loop game.

“You’ve been cancelled on Twitter, what do you do?…You’ve been caught saying something on camera that you shouldn’t have done, what’s your response?…There’s an ex-pro hanging around the studio like a f*cking vulture, how do you fend him off?”

Nicholas, incidentally, is apparently so far out of touch that he’s been ordered to spend the whole time facing the wall.

Watch the whole thing here. You won’t regret it.

The third episode of the series will be released next Saturday.

Spokesman Paddy Power said: “Without their usual front-man, Tiss has established himself as the pundits’ de facto leader – as they undergo a crack course of being down with the kids.

“So, of course, we see Le Tissier – a Premier League icon – deliver a pretty flawless TikTok dance routine. I’m sure it will bode well for the pundits, as they head to their Qatari TV interview.”