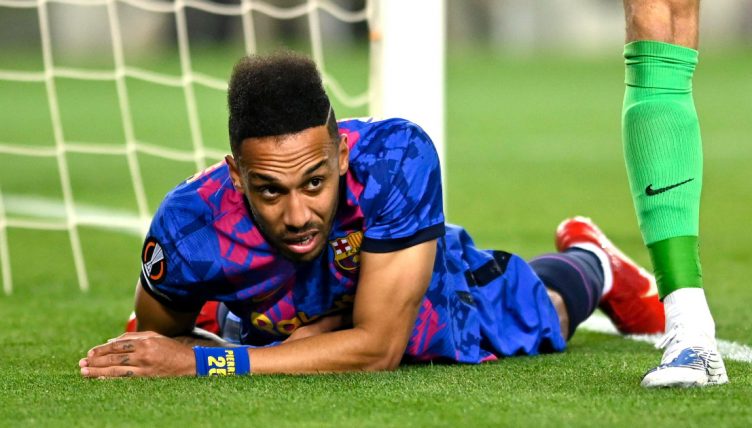 Pierre-Emerick Aubameyang has found a new lease of life at Barcelona since his move from Arsenal in January, but his worst moment in a Blaugrana shirt came as his side trailed 2-0 to Frankfurt at the Camp Nou.

Barcelona found themselves 3-1 down on aggregate in the Europa League quarter-final after Frankfurt stunned the hosts with a penalty and a screamer. Aubameyang had a glorious chance to pull one back but inexplicably fired wide on his weak left foot from just a few yards out.

Ousmane Dembele crossed the ball with pinpoint accuracy, and Aubameyang had the goal at his mercy, but fluffed his lines, much to the annoyance of the Barcelona fans in attendance at the Camp Nou.

Aubameyang has been fantastic since his arrival, scoring 10 goals in his first 14 games, including a stunning brace away at Real Madrid in El Clasico, but this was a moment he would rather forget.

Aubameyang was eventually substituted for Adama Traore on the hour mark, meaning he had no opportunity to atone for his error.

Barcelona manager Xavi had praised the forward in March after he had scored yet another goal.

“Auba has been a gift from heaven,” Xavi stated after a win against Osasuna.

“He is a positive player, he has come into the dressing room very well, he adapts well to the team, he creates scoring chances, he scores, he presses, he is a privilege to train.”

Aubameyang has been the subject of intense debate amongst Arsenal fans, with some praising Mikel Arteta’s decision to strip him of the captaincy and sell him for free, whilst others believe that losing the 32-year-old has significantly dented their chances of a top-four finish.

The Gabonese striker is loving life in Spain, linking up well with former Borussia Dortmund teammate Ousmane Dembele in Barcelona’s new-look attack, but the Europa League was Barcelona’s only shot at silverware this season, and this miss will not have helped his side’s chances.