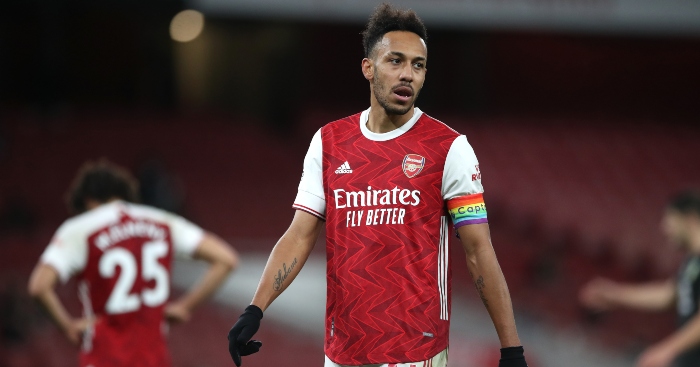 While Pierre-Emerick Aubameyang scored twice in Arsenal‘s 3-0 win over Newcastle United, he really should have had a hat-trick.

Aubameyang has been a shadow of his former self in recent weeks, scoring just three goals in his last 16 Premier League appearances before the Newcastle game.

The striker’s misery looked like it was going to continue on Monday night when he missed an absolute sitter in the 14th minute.

After the ball was played across goal by Bukayo Saka, Aubameyang only had to finish into an empty net but his effort cannoned off the post and bounced away from goal.

The Gunners captain made amends in the second half, striking either side of a Saka goal as the hosts recorded a comfortable 3-0 victory.

“I am really pleased with his performance overall,” Mikel Arteta said after the game. “That’s what he (Aubameyang) has done through his career and mentally you have to be really strong in order to do that.

“He has come out of a difficult period. We have been missing his goals a lot. Today he has come back and scored two and contributed to the team to win and this is exactly what we need. So I am really pleased for him.”