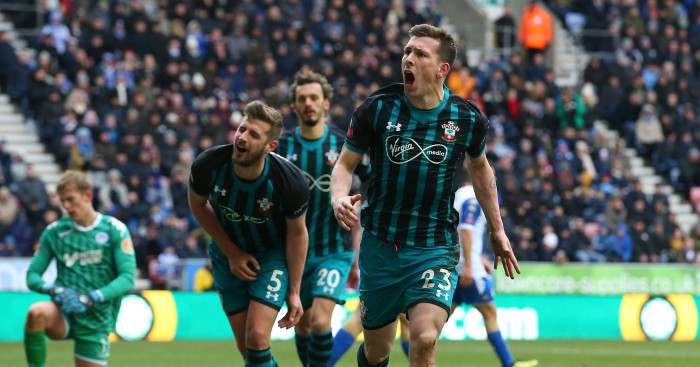 Jack Stephens got more than he bargained for when he celebrated Pierre Emile-Hojbjerg’s opener in Southampton‘s FA Cup clash with Wigan Athletic.

Southampton visited the DW Stadium in the quarter-final of the FA Cup as Mark Hughes took charge of the side for the first time since the sacking of Mauricio Pellegrino.

Saints have been in dire need of a confidence boost as they sit 18th in the Premier League, two points away from safety.

And after the scores were locked at half-time, Hojbjerg finally put Southampton ahead against the League One club with a header from a corner, before Cedric Soares sealed the victory with a goal in injury time.

Manolo Gabbiadini also had a penalty saved by Wigan goalkeeper Christian Walton, but our favourite moment came after Hojbjerg’s opener.

Nothing like a kick in the nuts when celebrating the opening goal😂😂 pic.twitter.com/qN1eKfmyHc