Watch: Pierre-Emile Hojbjerg tries to play on for Spurs despite horror tackle 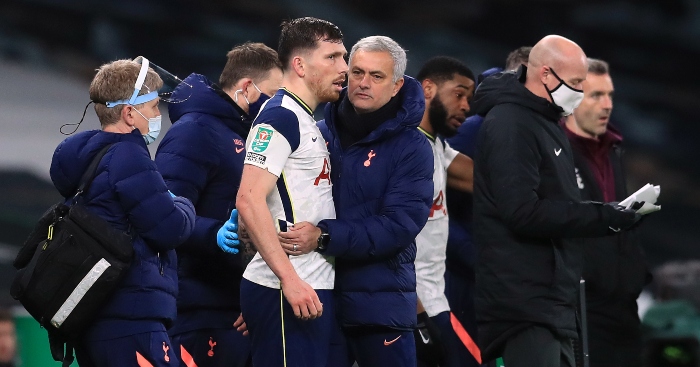 Tottenham‘s Pierre-Emile Hojbjerg was on the receiving end of a horror tackle from Brentford’s Josh Dasilva during the Carabao Cup semi-final.

With Brentford losing 2-0, Dasilva lunged in on a challenge with Hojbjerg and went over the ball, smashing into the midfielder’s shin.

He was left with blood pouring down his shin and had to be calmed down by his team-mates while Jose Mourinho reportedly branded the tackle “a disgrace” on the touchline.

Having not seen the incident in real-time, Mike Dean was encouraged to review it on the VAR monitor and quickly decided to brandish the red card.

Despite trying to play on, the Denmark international had to be replaced by Japhet Tanganga and then headed straight down the tunnel for treatment.

Højbjerg still wants to play after this pic.twitter.com/7K2jEGlLNb

no way Højbjerg still wanted to play after that tackle😭😭my warrior pic.twitter.com/DhxRjKE9FX