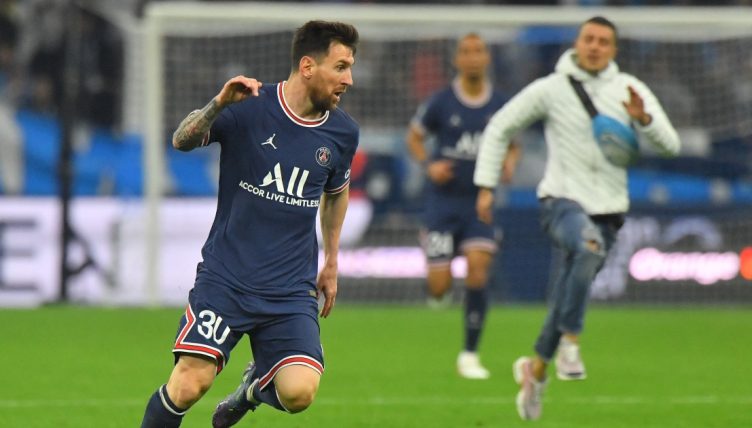 Stopping Lionel Messi in his tracks can seem like an impossible task – but one fan made it look easy during PSG’s 0-0 draw with Marseille.

Messi, who left Barcelona and joined PSG on a free transfer in the summer, had endured a mixed start to the 2021-22 season.

While he’s scored three goals in the Champions League, the Argentina international is yet to register a direct goal contribution in Ligue 1.

During the 72nd minute against Marseille, Messi attempted to break the deadlock and embarked on a trademark run towards the edge of the box.

But he was halted by the referee’s whistle after a figure in a white hoodie was somehow able to make his way onto the pitch at the Stade Velodrome.

The fan was eventually led off by several security guards and play resumed, although the incident had derailed PSG’s promising attack. Neither side were able to get a winner but PSG are still seven points clear at the top of Ligue 1.

Well, that was different…

A supporter runs on the pitch as Messi & 10-man PSG are on the counter-attack, once again interrupting play.#beINLigue1 #LeClassique #OMPSG pic.twitter.com/wNH6lgz7rU