Watch: Pogba says he needs to practise tackling after giving away penalty 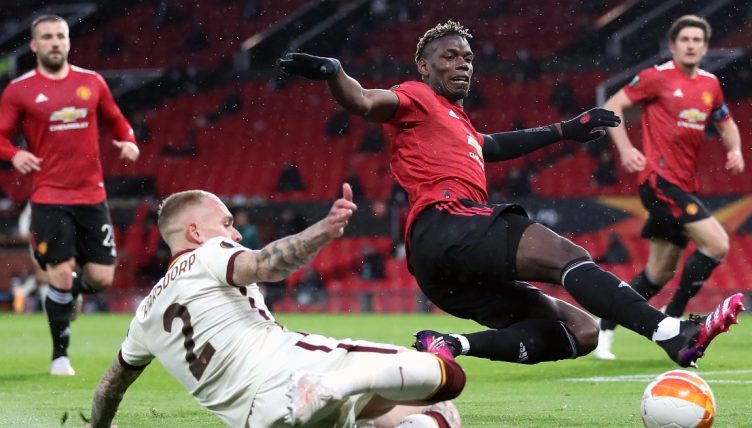 Paul Pogba found himself at the centre of pretty much everything on Thursday night as Manchester United came from behind to beat Roma 6-2 in the first leg of their Europa League semi-final.

The 28-year-old gave the visitors a route back into the game at Old Trafford after Bruno Fernandes had chipped United into an early lead – a goal that Pogba also had a big hand in.

But while tracking back to defend one of Roma’s first forays forward in the 15th minute, he slid in to block right-back Rick Karsdorp’s cross. He succeeded but the ball ricocheted off the midfielder’s right leg and onto his flailing arms.

Lorenzo Pellegrini converted from the spot and Edin Dzeko bundled home a second just under 20 minutes later to put Paulo Fonseca’s side in front.

But a ruthless display, spearheaded by Pogba, Fernandes and Edinson Cavani, in the second half ensured that Ole Gunnar Solskjaer’s men would take a big advantage into the second leg.

Speaking to BT Sport after the game, Pogba was asked about the tackle that led to the penalty.

Jokingly, he replied: “I just don’t know how to tackle. Why should I tackle? That’s my problem, I try to tackle and be the English guy. I need to practise more!”

"I just don't know how to tackle! Why should I tackle?

"That's my problem, I try to tackle and be the English guy. I need to practice more!" 🤣

Mission accomplished for Manchester United and Paul Pogba, even if there was one *minor* blip 😉

Can you name the six Spanish players to appear for Man Utd in the PL?