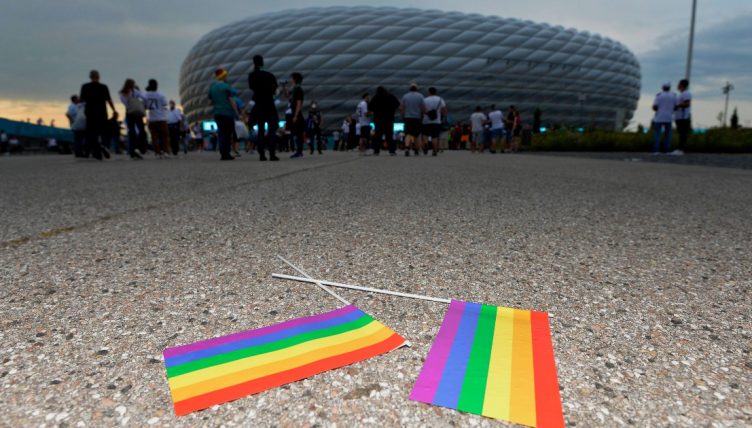 A protestor ran onto the pitch during Hungary’s national anthem with a rainbow flag, in response to the country’s anti-LGBT legislation, ahead of their Euro 2020 clash with Germany in Munich.

UEFA had controversially stepped in to stop the local Munich authorities lighting up the Allianz Arena with rainbow colours and a strong pro-LGBT message for the visit of the Hungarian national team.

“Racism, homophobia, sexism, and all forms of discrimination are a stain on our societies and represent one of the biggest problems faced by the game today,” UEFA explained in a statement.

“Discriminatory behaviour has marred both matches themselves and, outside the stadiums, the online discourse around the sport we love.

“However UEFA, through its statutes, is a politically and religiously neutral organisation. Given the political context of this specific request – a message aiming at a decision taken by the Hungarian national parliament – UEFA must decline this request.”

Local LGBT activists handed out thousands of miniature rainbow flags to spectators ahead of the match, while one protestor managed to get on the pitch and proudly sent a message during the Hungarian anthem.

Oh wow! One spectator just ran on with a rainbow flag during the Hungarian national anthem. Loud cheers from the Germany block pic.twitter.com/EDJzdV0tbx

A spectator at the Allianz Arena ran onto the pitch during the Hungarian National Anthem waving a rainbow flag pic.twitter.com/6Clx0MeRRi