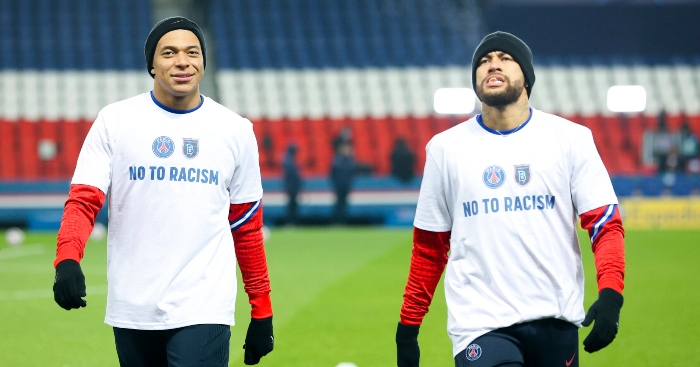 PSG and Istanbul Basaksehir players produced a powerful anti-racism message before the restart of their Champions League tie.

The match was abandoned on Tuesday after the fourth official was accused of using a racist term towards Basaksehir assistant Pierre Webo.

Former Newcastle and Chelsea striker Demba Ba led the protests and PSG’s players walked off the pitch with Istanbul Basaksehir in support.

UEFA are currently investigating the incident and the four Romanian match officials were replaced for the re-start at the Parc des Princes stadium.

Both sets of players and the new match officials wore ‘no to racism’ T-shirts in the warm-up before taking a knee around the centre circle during the Champions League anthem.

PSG then cruised to a 5-1 win and secured top spot in their group thanks to Neymar’s hat-trick and a Kylian Mbappe brace.

PSG and Basaksehir unite to take a knee during the Champions League anthem, after Tuesday's alleged racist incident. pic.twitter.com/0igIfpADcE