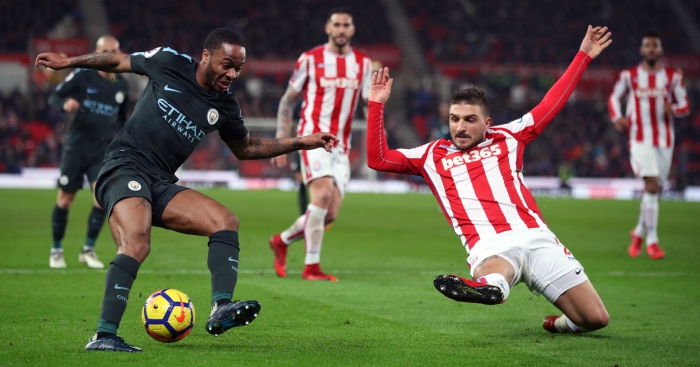 David Silva stole the headlines as his two goals led Manchester City to victory at Stoke City on Monday night – but a brilliant bit of Raheem Sterling also caught our eye.

Silva’s goals either side of the half moved City 16 points clear of rivals Manchester United, meaning they will win the Premier League at Old Trafford with wins in their next two matches.

But it wasn’t just Silva who impressed in the win.

Sterling, who is still the Premier League’s fourth top scorer behind Harry Kane, Mo Salah and team-mate Sergio Aguero, also mesmerised us with some brilliant skill early on in the second half.

He received the ball inside the penalty box and stopped dead, with a stepover and a sudden burst of pace to get past one before some clever feet and swift dummy to send another for a bus only for his shot from close range to be well saved by the legs of Jack Butland.

Watch the excellent run below.