Watch: Ralph Hasenhuttl breaks down in tears after big win over Liverpool 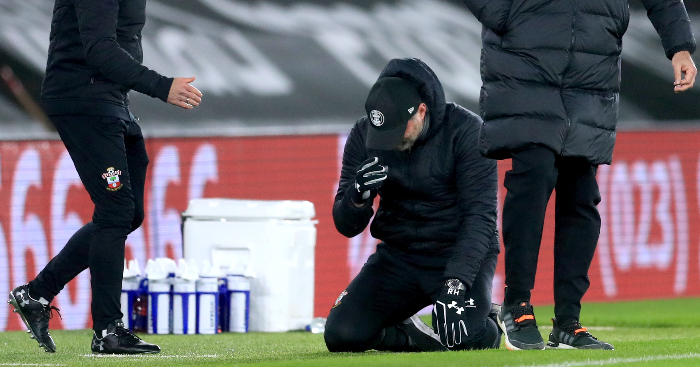 Southampton‘s 1-0 win over Liverpool clearly meant a lot to Saints boss Ralph Hasenhuttl, the first of his career over Jurgen Klopp.

The Austrian coach sunk to his knees at the final whistle and took a moment to take it all in as Klopp went over to shake his hand, instead opting to go with a pat on the head.

Liverpool were restricted to just a single shot on target on the night at St. Mary’s as they suffered just their second Premier League defeat of the season, while Southampton moved within four points of them at the top of the table.

Hassenhuttl was absent from Southampton’s last match, a goalless draw at West Ham, after a member of his household tested positive for coronavirus. But he was cleared to return for Liverpool’s visit and gave the victory over the champions a fittingly passionate response.

Southampton boss Ralph Hasenhuttl sinks to his knees at full-time after beating Liverpool! 👏

Southampton boss Ralph Hasenhuttl hugging all his Southampton players with tears in his eyes after the Liverpool win! 😢 pic.twitter.com/0sw5Q6CgVW