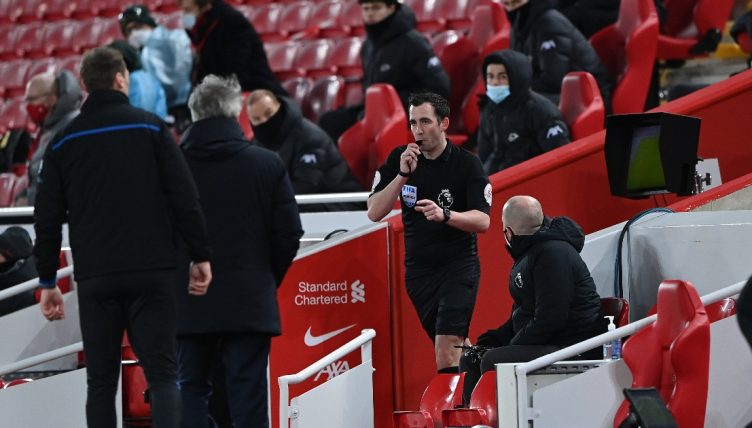 Everton‘s 2-0 win over Liverpool was the club’s first Merseyside derby victory since 2010, and first at Anfield since 1999. Needless to say, the likes of Gary Neville were enjoying watching it unfold.

There can be few complaints over the result in the end, which saw Carlo Ancelotti’s Toffees move level on points with the champions, but there was plenty to be said about the decision for the penalty, which Gylfi Sigurdsson dispatched late on to double the visitors’ lead.

Sky Sports commentator Jamie Carragher didn’t agree with the decision – an opinion echoed by Graeme Souness in the studio – after Trent Alexander-Arnold was judged to have fouled Dominic Calvert-Lewin.

VAR official Kevin Friend advised referee Chris Kavanagh to take another look at the pitchside monitor, which he duly did, but only gave it a look for a few seconds before sticking with his original decision.

Safe to say, that caused quite an outcry on social media. Make your own mind up on the incident with the video below – the monitor check takes place at 01:44 – and we’ve also compiled some of the best responses on Twitter.

They’ve only sent him over to make em think it was being overturned 🎣 😂 pic.twitter.com/FV7xbdPgyX

Sean Dyche at the Grand Canyon

In terms of collecting stats on VAR decisions and overturns, in this case the VAR advised a decision in Liverpool's favour and it was rejected. Therefore the outcome was negative for Liverpool.

Kavanagh went over to the screen as though his wife had asked him to watch one of those tap to tidy videos on Instagram. Had no interest whatsoever.

Honestly I do a better job of pretending to read the Nando’s menu before ordering than Chris Kavanagh has done pretending to look at that screen there.

Watch: Pickford pulls off world-class save to deny Henderson volley