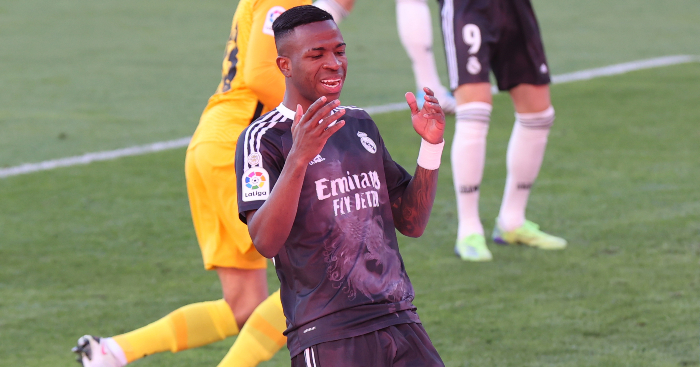 Real Madrid‘s Vinicius Junior won’t want to see this clip again, with what looks like one of the worst misses of the season.

The 20-year-old Brazilian looked in a perfect position for a tap-in against Sevilla, on hand inside the six-yard box after Bono spilled the ball at his feet.

But his body position wasn’t quite right and he found himself unavailable to get on the end of the golden opportunity, with it squirming under his leg after his effort missed it completely, before bouncing up for a grateful Bono to recover.

In fairness to the Madrid forward, the camera angle isn’t kind to him, with subsequent replays showing the keeper getting just enough of a knick on the ball to take it out of his path.

Los Blancos nevertheless got the win, getting back to winning ways with a hard-fought 1-0 at the Ramon Sanchez Pizjuan. Vinicius had the telling touch, too, with his effort deflected in off the Sevilla keeper.