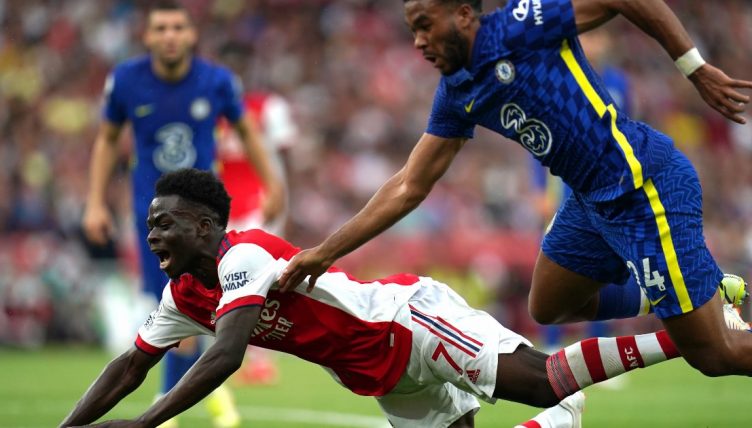 Bukayo Saka went down in the penalty area under a challenge from Reece James as Arsenal hosted Chelsea at the Emirates Stadium on Sunday afternoon – but referee Paul Tierney was unmoved.

With a little less that 40 minutes gone and Arsenal 2-0 down to goals from Romelu Lukaku and James, Saka burst into the box to get on the end of a pass from Nicolas Pepe.

As he did, James clumsily barged into him, with their legs getting caught in a tangle and Saka tumbling to the floor.

On Sky Sports, Gary Neville said: “First impressions, I thought that was a penalty.”

Paul Tierney disagreed, perhaps interpreting it as a shoulder-to-shoulder challenge or mere coming together, and he waved for play to continue.

“I think he’ll be very nervous for the next 30 seconds, Reece James,” Neville added, referring to the impending VAR review.

Yet the video assistant agreed with the on-pitch officials and James breathed a sigh of relief.

Arsenal did not get the chance to reduce the deficit from the spot.