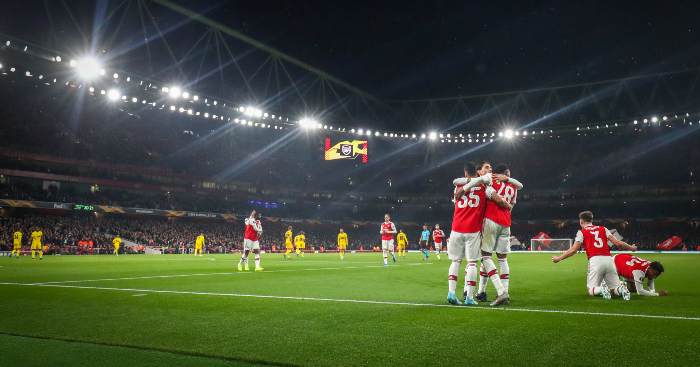 Arsenal supporters had a night to enjoy at the Emirates as a Unai Emery’s young side put Standard Liege to the sword with a 4-0 win in the Europa League.

A much-changed Arsenal side recorded their second group stage win in as many games with an impressive victory over the Belgian visitors.

The hosts led 3-0 at half-time thanks to Gabriel Martinelli’s brace and a Joe Willock strike, before Dani Ceballos bagged a fourth after the break.

And a fun evening at the Emirates was summed up by Reiss Nelson running to celebrate with Willock, only to trip and fall over as he reached his team-mate.

Great footwork by Reiss Nelson 🤣 seriously though, we need to work on our celebrations #AFC #Arsenal #ARSSTL pic.twitter.com/qKe9ixl63d