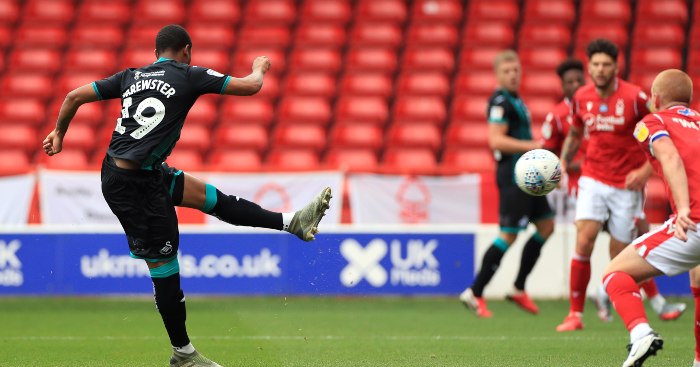 Liverpool loanee Rhian Brewster continued his superb goalscoring form for Swansea City with another goal courtesy of a brilliant strike in a 2-2 draw Nottingham Forest at the City ground.

Brewster has been among the Championship’s most prolific scorers since joining Swansea on loan from Liverpool in January, with his effort against Forest his ninth in 18 league appearances.

Amid talk of Liverpool needing a back-up option for Roberto Firmino, Brewster has pushed his cause with his form for the Swans and has made himself a contender to feature more prominently under Jurgen Klopp next season.

The 20-year-old gave Swansea the lead in the eighth minute, rifling the ball into the top corner with his weaker foot, but Sammy Ameobi struck twice for Forest either side of Andre Ayew’s penalty.

Brewster’s 9th goal of the season for Swansea. What a strike pic.twitter.com/LT7ySZgTze

Some finish from Brewster. pic.twitter.com/AFyQaVl5e8