Watch: Rio criticises Rashford for giving pen to Martial while on hat-trick 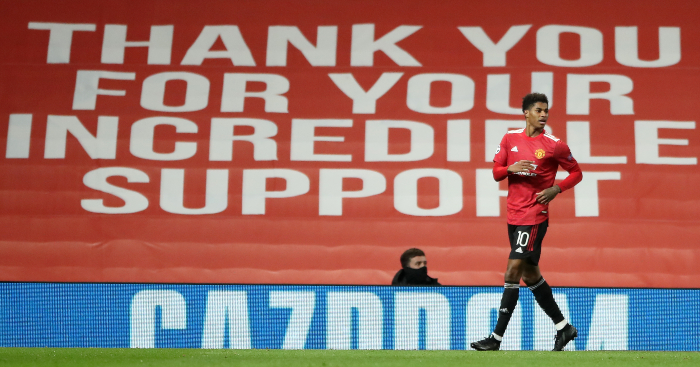 Another week of 2020, another week in which Marcus Rashford puts us all to shame.

You might think Rashford has a lot on his plate in trying to balance campaigning to end child hunger in the UK with playing for Manchester United, but as this last week shows, he’s absolutely smashing it.

With his parliamentary petition reaching over one million signatures and restaurants, cafes and bars around the country offering to help feed schoolchildren over half-term, the forward came off the bench to score an 18-minute hat-trick in United’s 5-0 victory over RB Leipzig in the Champions League.

And it could have been more. Five minutes before Rashford completed his hat-trick, United were awarded a penalty, but the England international instead gave Anthony Martial the chance to open his account for the season, which he duly took.

Rashford’s benevolence was rewarded when his third goal arrived shortly afterwards, but Rio Ferdinand was not too impressed by the 22-year-old generosity in the BT studios.

"Messi and Ronaldo ain't giving a pen away!"

"That's why he'll be the captain, he thinks of others."

Two schools of thought on Marcus Rashford allowing Anthony Martial to take a pen despite being on a hat-trick 😂 pic.twitter.com/ESQQb3MU64