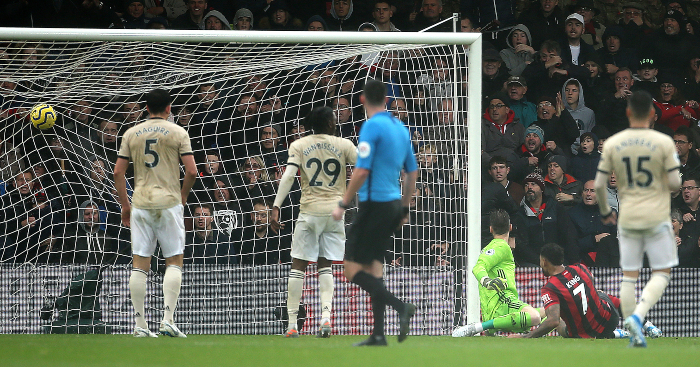 Rio Ferdinand offered some words of wisdom to Aaron Wan-Bissaka after the right-back was at fault for Bournemouth’s winner in Manchester United‘s 1-0 defeat at Dean Court.

Former United man Joshua King bagged the only goal of the game just before half-time after Wan-Bissaka was unable to prevent the striker turning inside the Red Devils’ penalty area.

Ferdinand was on form on BT Sport working a pundit – he earlier explained why he thought Sir Alex Ferguson got his tactics wrong in United’s defeat to Barcelona in the 2011 Champions League final with some fascinating analysis – and dissected where Wan-Bissaka went wrong.

The former United defender refused to be too critical of the 21-year-old, but Wan-Bissaka could pick worse former players to learn from.

"We could sit here and dissect Aaron Wan-Bissaka's game and there's some great stuff about it. He'll need to learn patience, timing and positioning."@rioferdy5 looks at the Bournemouth goal and how Man Utd's new defender can take his game to the next level. pic.twitter.com/2wGqLInQVx

A tribute to Rafael, an emobodiment of Man Utd’s Sir Alex Ferguson era