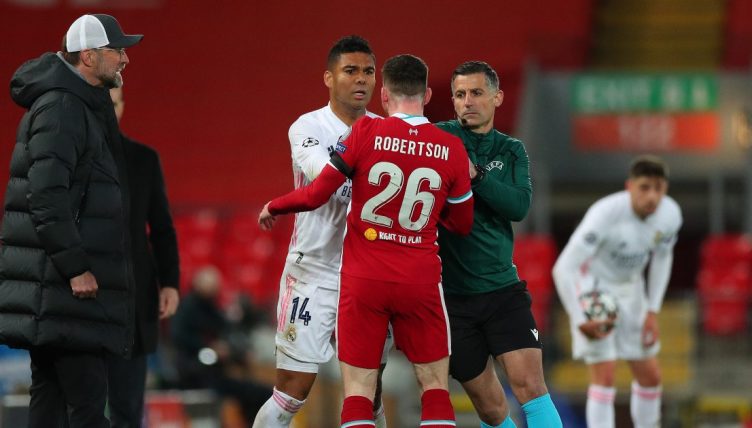 Casemiro added a healthy dose of spice to proceedings at Anfield on Wednesday night as Real Madrid progressed to the Champions League semi-finals with a 0-0 draw against Liverpool.

Leading 3-1 following a dominant first-leg performance, Real survived an early scare from Liverpool, who should have taken the lead through Mo Salah after less than two minutes, meaning Zinedine Zidane’s team will now face Chelsea in the final four.

Tensions were high on Merseyside as the Real Madrid team bus was left with smashed windows, having been hit by objects thrown by supporters outside the stadium.

Liverpool’s intense start prompted the sense that a comeback could be on, but Real Madrid gave as good as they got in retaliation as Karim Benzema hit the post moments before Casemiro caused a flashpoint on the touchline.

The midfielder was seen limping, only to fly in on James Milner as the ball broke to the Liverpool man.

Andy Robertson, a man never afraid to get stuck, immediately arrived to square up to Casemiro, along with most of the Reds’ bench.

Jurgen Klopp and Zidane, meanwhile, seemed to be thoroughly enjoying the whole thing.