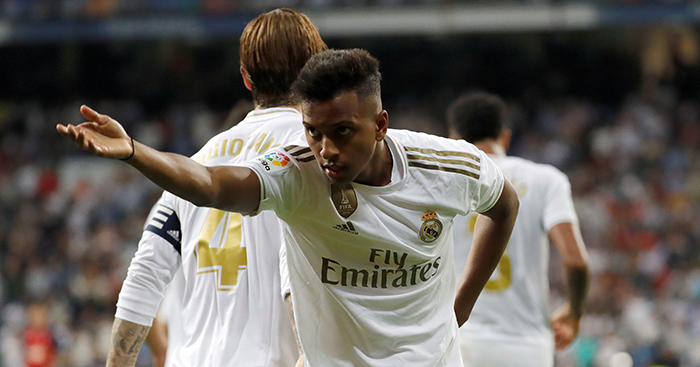 Rodrygo stepped off the bench to make his Real Madrid debut against Osasuna on Wednesday night – and promptly scored a stunning goal.

Real agreed to pay a reported £40million to sign Rodrygo from Santos in 2018, but the Brazilian only actually made the move to Madrid over the summer just gone after turning 18.

And he has wasted no time in announcing himself on the biggest stage, scoring his first goal just 93 seconds after coming on as a substitute against Osasuna.

It was the fastest debut La La Liga goal ever scored by a Real Madrid player and the quickest debut league goal for Los Blancos since Ronaldo – he had previously scored in the competition for Barcelona – in 2002.

😎 Just on the pitch a few seconds and what a cool finish this is from 18-year-old Rodrygo to make it 2-0!

⚪ What a night for Real Madrid's young Brazilians! pic.twitter.com/yYDmN4QfeC

Rodrygo wrapped up a 2-0 win for Zinedine Zidane’s side after 19-year-old Vinicius Junior had earlier scored a brilliant goal of his own, which you can watch below.

The three points moved Real to the top of La Liga with 14 points from six games, one more than Atletico and four ahead of Barcelona, who edged past Villarreal on Tuesday.

⚽ Vinícius Júnior curls one into the top corner to give Real Madrid the lead!

⭐ It's the first goal of the season for the young Brazilian star, and look at what it means to him! pic.twitter.com/7inBbhtzZr