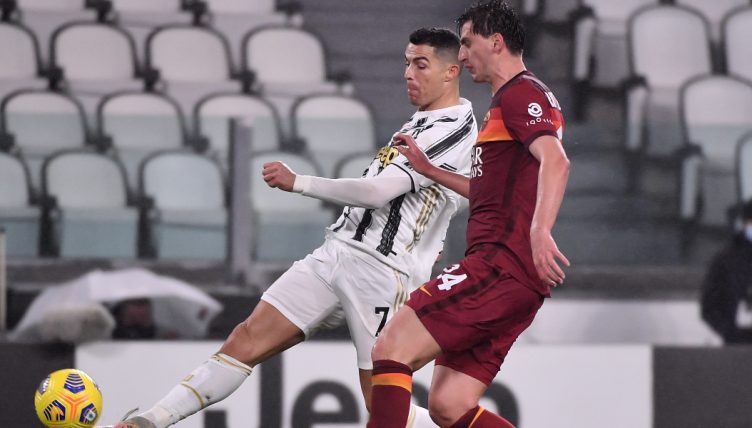 Cristiano Ronaldo helped Juventus to a huge three points on Saturday evening, scoring the opener as Andrea Pirlo’s side stayed in the title race with a 2-0 win against Roma.

The Portuguese’s goal came early, collecting the ball on the edge of the area before finishing cooly with his so-called weaker left foot.

He came close to making it 2-0 just moments later. Unleashed down the right-hand side of the box, the five-time Ballon D’or winner struck a shot off the underside of the bar, the ball landing on the line on it’s way back down.

Thankfully, with goal-line technology available, we no longer see wrong calls in that area.

Ronaldo, however, was not convinced. Storming over to the referee, he insisted that the ball had crossed the line. But Daniele Orsato laughed off the legend’s advances, flashing him his watch as proof.

Ronaldo still was not convinced however and tried to grab his watch for a better look.

Thankfully for the ref, an own goal from Roger Ibanez made the points safe for the home side – or who knows what he would have faced at full-time!

The result leaves Pirlo’s men five points behind league-leaders Inter Milan, with a game in hand on them as well. The two will meet on Tuesday night too, albeit in the Coppa Italia, while we have to wait until May 16 for the league clash.