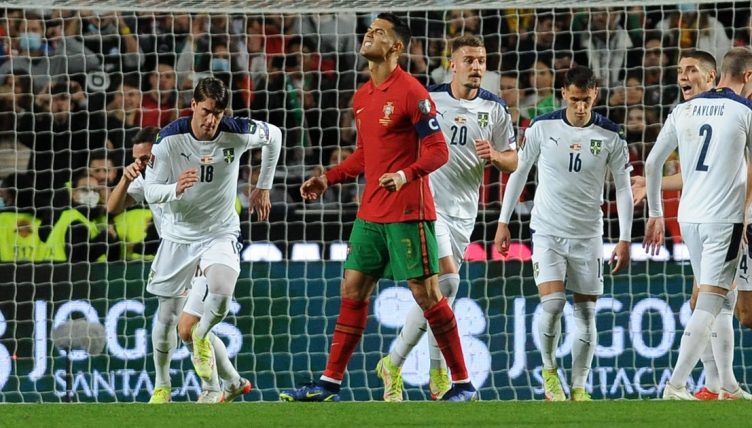 Manchester United’s Cristiano Ronaldo has a penchant for the spectacular and a well-earned reputation as a clutch player, but even he couldn’t pull off this ridiculously ambitious attempt.

To set the scene, Aleksandar Mitrovic’s 90th-minute header had just put Serbia 2-1 ahead, booking their place at next year’s World Cup in Qatar, at Portugal’s expense.

The goal from the Fulham forward meant that Serbia were group leaders, leaving Portugal to settle for second place, with a two-legged play-off to come next March.

That was unless Portugal could find a way back to get to level terms during four minutes of injury-time.

Ronaldo evidently saw his name up in lights – which, to be fair, is usually the case – when Joao Cancelo lofted in a ball from deep towards him, with just 90 seconds remaining on the clock.

Well over 20 yards out, the 36-year-old controlled it on his chest before doing a 180-degree spin to catch it sweetly on the volley. Or so he envisaged.

He caught the ball, but got the contact disastrously wrong, sending it well over the bar, beyond the empty space behind the nets and into the stands. Not his night.

POV: Portugal need a goal to qualify for the WC pic.twitter.com/7UmLvVU12p