Watch: Rotherham and Ipswich fans chant ‘to me, to you’ for Barry Chuckle 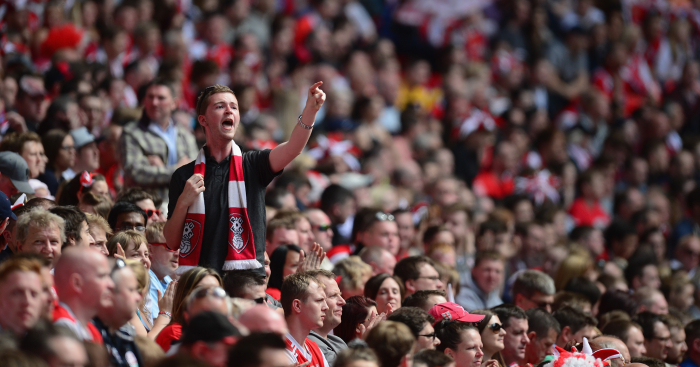 Everyone’s childhood came rushing back a week ago as the news spread of the death of Barry Chuckle.

The younger half of the famous comedy duo The Chuckle Brothers sadly passed away aged 73 after battling cancer, and the country joined to mourn one of its finest.

Paul and Barry are both famously Rotherham United fans, and ahead of their home game with Ipswich on Saturday, the club held a minute’s applause – also remembering former chairman Syd Wood who passed away recently.

But in the 73rd minute – Barry’s age – the ground joined in unison to remember one of their most famous supporters.

It's the 73rd minute at New York Stadium and Rotherham and Ipswich fans are chanting 'To Me, To You' at each other in memory of Barry Chuckle #rufc #itfc

Both sets of supporters joined in chants of their famous catchphrase, ‘to me, to you’, before ‘there’s only one Barry Chuckle’ rang around the New York Stadium.

In a touching moment, the video shows Paul acknowledging the crowd, blowing kisses in the direction of the supporters chanting his brother’s name.

Rotherham United and Ipswich Town with an incredible tribute to the late Barry Chuckle this afternoon by chanting his famous line: "To me, to you" in the 74th minute. Great to see Barry’s brother Paul acknowledge the fans too. Really nice moment. 👏🏻 pic.twitter.com/W1xqI6GofH