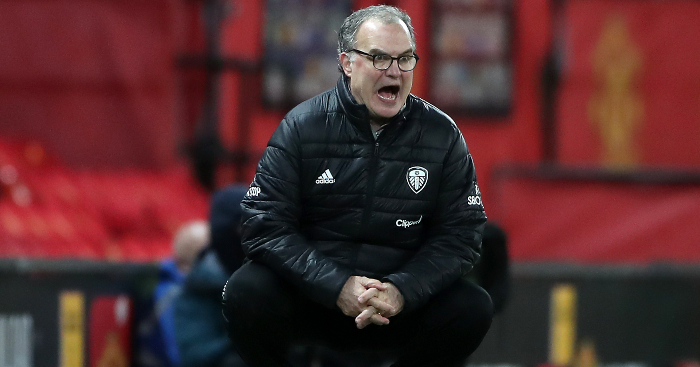 The 2020-21 Premier League season lived up to its bizarre best once again as the highly anticipated clash between Manchester United and Leeds United ended in a 6-2 home win.

It was the first time the sides had met at Old Trafford since Simon Grayson led a League One Leeds to an iconic FA Cup win back in 2010.

Victory for United on Sunday, however, saw them climb up to third in the top flight with Marcelo Bielsa’s men sat in 14th, and Red Devils legend Roy Keane had something to say about the visitors at half-time.

With the scores stood at 4-1, the conversation inevitably turned to Leeds’ habit of playing expansive, attacking football, no matter who their opponents may be. It was an approach that saw them beat Newcastle United 5-2 in midweek after all.

“To be fair to Leeds, they’ve got a lot of courage, a lot of stupidity as well,” Keane said of Bielsa’s approach during the break, also praising their ability to create a lot of chances.

🗣 "To be fair to Leeds they've got a lot of courage, a lot of stupidity as well" 🤣

Two goals each from Scott McTominay and Bruno Fernandes helped United to all three points, with Dan James and Victor Lindelof also getting in on the act.

Liam Cooper and Stuart Dallas did their best to drag Leeds back into the match, but it always looked like being an impossible task.