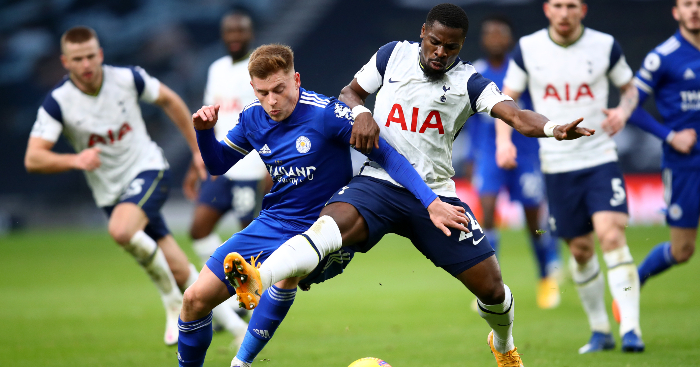 Christmas certainly did not come early for Tottenham on Sunday afternoon as Jose Mourinho’s men were beaten 2-0 at home by Leicester City.

A first-half penalty from Jamie Vardy and one at the wrong end from Toby Alderweireld condemned Spurs to back-to-back defeats in the league for the first time this season, but it was Serge Aurier’s name that was once again being mentioned for all the wrong reasons.

With Brendan Rodgers’ side slightly shading the first-half, it was crucial that Mourinho’s men remained alert and resolute at the back – but Aurier had other ideas.

After a tame Foxes set-piece, the ball dropped to Wesley Fofana, facing away from the Spurs’ goal. There was no threat. Or so everyone other than Aurier thought.

The Ivorian saw his chance to barge through the back of the centre-back and, following a VAR check, conceded a penalty, just seconds before half-time.

What would Roy Keane make of the challenge? Well, obviously, he did not approve. In the Super Sunday studios during the break, the Irishman slammed the challenge, declaring it “madness”, also claiming he needed to be careful what he said about Aurier.

Jimmy Floyd Hasselbaink piled in as well, claiming it was similar to a rugby tackle.

What do you think?

🗣️ “That is a rugby tackle”

Fair to say Roy Keane and Jimmy Floyd Hasselbaink were not impressed with Serge Aurier’s defending for the penalty pic.twitter.com/RQiftnb3LX