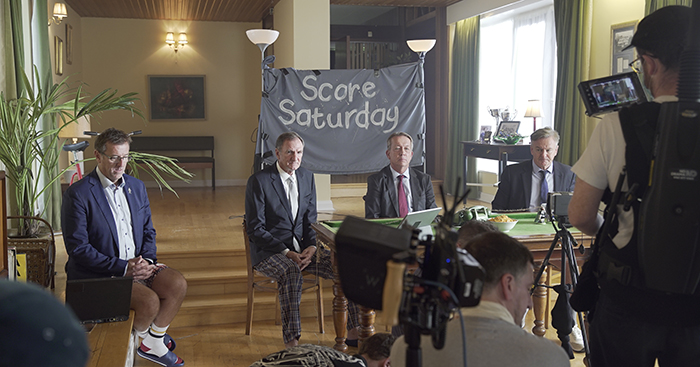 Matt Le Tissier said it was “time to look forward to life’s next challenge” after he, Phil Thompson and Charlie Nicholas were dropped from Soccer Saturday – but we absolutely did not expect this.

We wouldn’t have been surprised to see the iconic trio follow Andy Gray and Richard Keys to Qatar after leaving Sky Sports – and who knows, they still might – but what we definitely did not expect was to see them star in their own sitcom.

Well, thanks to Paddy Power, that’s exactly what’s happened. And, remarkably, all three of them are absolutely brilliant in it.

The three-part series, entitled Pundits, features the house-sharing Thompson, Nicholas and Le Tissier bemoaning their luck after being shown the door.

But they aren’t down for long – because using an ancient camcorder and with the imaginatively-titled Score Saturday plastered on a bedsheet, Alan Curbishley takes the anchor role to help the lads launch their own version of the iconic show.

And, honestly, we cannot put into words how good Curbishley is in it. It turns out he’s been wasted in football all these years; he’s a comedy genius. He does deadpan better than Jack Dee.

From the moment he pops up at 11 seconds, we were in stitches. “I’ve got my cans. Cans for Curbs. Curbs’ cans.” Absolutely brilliant.

Also featuring Charlie Nicholas practicing for a career in stand-up career wearing a sparkly mask, towel on his head and holding a hairbrush as a microphone, the whole thing is 2m 48s of genius.

Across two further instalments, we see them prepare for a new opportunity in TV, learn about the modern world of football and finally, contact the spirit world for some pointers, naturally.

The episodes will be released on Saturdays across Paddy Power’s social channels.

Paddy Power said: “The Premier League is back in our lives once again, but there are some familiar faces that won’t be on our screens for the first time in years.

“Or so you thought. We’ve managed to get the gang back together, and we see what their lives are like now as they live together and try to navigate the new world of football.

“We cannot confirm or deny how accurate it is to the truth.”