Watch: Sacked Soccer Saturday pundits turn to ouija board for next job 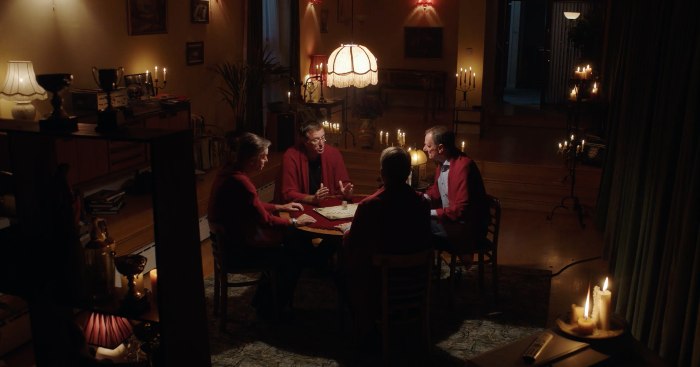 When Matt Le Tissier, Charlie Nicholas and Phil Thompson were given the boot from Soccer Saturday, we never expected to see them star in their own sitcom, and we certainly didn’t expect them to co-star alongside Alan Curbishley. But we’re so, so glad they have.

Paddy Power’s new show ‘Pundits’ is following the quartet as they try to find a new opportunity after their time at Sky Sports came to an end.

If you haven’t already seen them, watch episode one here and episode two here. You won’t regret it.

The boys have now got their sights on lucrative new roles in Qatar, but so far their own attempts at hosting a new show proved somewhat ramshackle, while Le Tissier’s social media advice ended with Thompson in a headband shouting, “Mummy,” and a ominous suggestion that they need help from a higher power.

In the final episode of the three-part series, Le Tissier hits upon his genius idea: “It’s time to contact the f*cking spirit world.”

The following sight of the quartet sat around a ouija board bought off Dean Gaffney will stay with us forever – as will the revelation that Paul Merson once used one to contact the spirit of Lee Harvey Oswald and ask him if he did indeed kill president John F Kennedy.

Le Tissier’s idea is to contact someone who managed to change with the times for advice on how they might do the same. Someone like Prince, David Bowie, or Bradley Walsh. We won’t give away any spoilers about who they do get in contact with, but apparently he used to play for Swindon Town.

As in previous episodes, our new comedy hero Curbishley is the star of the show. And you can watch the whole thing here.

“As for Curbs, you can see why he hasn’t rushed back into football management. He’s presumably been knocking about making brilliant indie films that only proper cinema fans know about – he’s magnificent.”