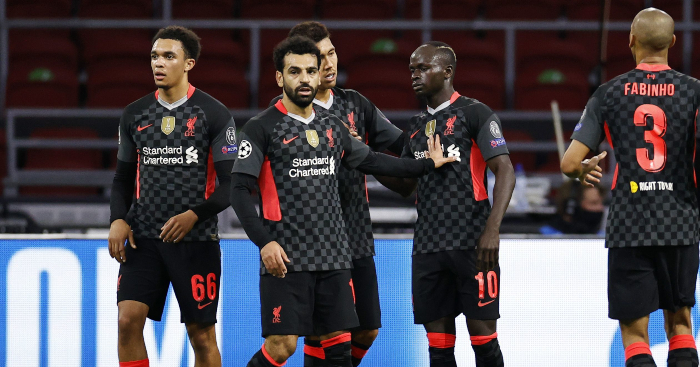 For all that is written about Sadio Mane and Mo Salah’s apparent ‘rivalry’ at Liverpool, one thing is clear: they both really, really like scoring goals.

It’s not exactly a new discovery to make about two world-class forwards, but their relentless thirsts for goals occasionally sees the duo get frustrated with each other.

Having already seen a previous wondergoal ruled out by VAR, Salah was determined to make amends in Liverpool’s 2-1 victory over Sheffield United, later embarking on a slaloming run only to see his shot come back off the post.

Working as a pundit for DAZN, former Liverpool striker Michael Owen spotted something in the reaction of the two players that spoke of their internal competition to out-do one another.

“This is brilliant play from Salah. Not only is it a great turn, but then he cuts across his man,” Owen told DAZN. “Of course Sadio Mane is at the back post expecting a little tap-in.

“He definitely says something to Salah, as we see here – and then there’s a reaction – so there’s still something there.”

Owen added: “I expect it and it’s probably healthy at that point, at the moment. But if it bubbles over into anything else then it’s not healthy.

“But I think it’s healthy that both players are really desperate to score. We’ve seen it before and I don’t think it’s worth getting too carried away at the moment.

“But you can see it’s still there.”