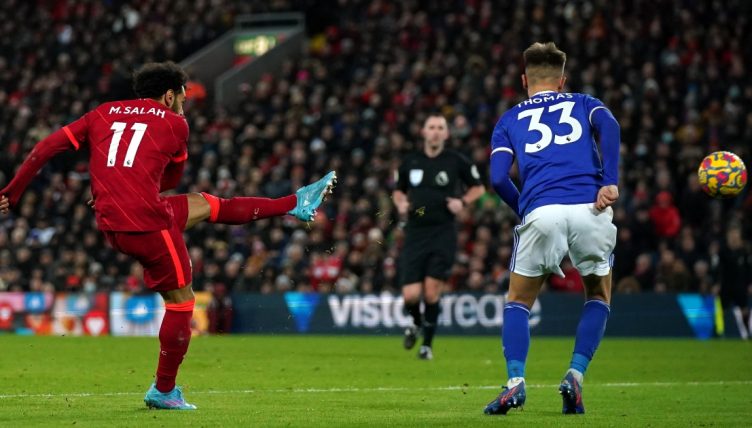 Mohamed Salah came inches away from marking his first Liverpool appearance since AFCON heartbreak with a trademark stunner in front of the Kop.

Jurgen Klopp named Salah on the bench against Leicester after he only returned to training on Tuesday following Egypt’s penalty shoot-out final defeat against Sadio Mane’s Senegal.

The Egyptian King was introduced early in the second period and showed no hangover from the recent disappointment with his country.

A raucous Anfield reception for the 29-year-old as he entered the field probably helped.

With Liverpool just one goal ahead, Salah almost put the game beyond Leicester’s reach in the 77th minute. Cutting in on his left foot in typical fashion, his curling effort seemed certain to find the top corner but for the crossbar’s prevention.

Diogo Jota’s late finish made sure of the points as the Reds kept their slim title chances alive – much of which will depend on a determined, trophy-hungry Salah.

Klopp will be delighted to have this season’s Premier League top goalscorer back and firing.

After the game, the German boss said: “He had 35 minutes roundabout, it was the idea to bring him early, that we really can use him then.

“We played a lot of football in the first 55 minutes, so that’s tiring for the opponent as well, and that Mo can then come on gives your game a different dimension and we nearly used that.”