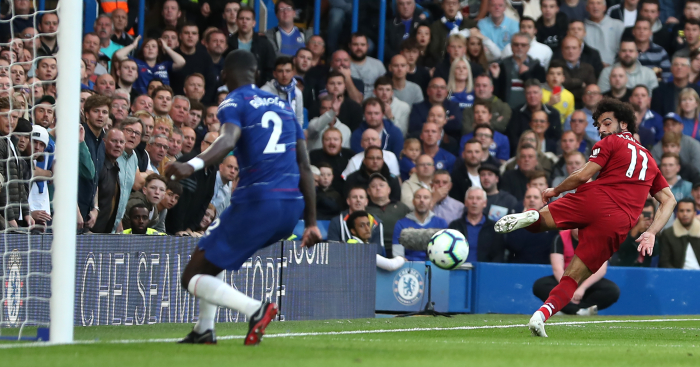 Mohamed Salah had a difficult night in a rollercoaster game as Liverpool drew with Chelsea – but it could have been so different were it not for a brilliant intervention from Antonio Rudiger.

In a hugely entertaining clash at Stamford Bridge, Liverpool snatched a point at the death as substitute Daniel Sturridge cancelled out Eden Hazard’s opener with a stunning goal.

It was a frustrating night for Salah, who wasted a couple of opportunities and was eventually substituted for Xherdan Shaqiri in the second half.

The Egypt international appeared set to score in the first half after rounding Chelsea goalkeeper Kepa.

But, with the goal at his mercy, Salah was thwarted by an excellent clearance off the line from Rudiger.

Rüdiger, seeing that Kepa was likely to be in trouble, broke his neck to get back in position to clear Mo Salah's equalizer off the line. The home fans loved that. 1-0. #CFC pic.twitter.com/cg0kRxs2yo