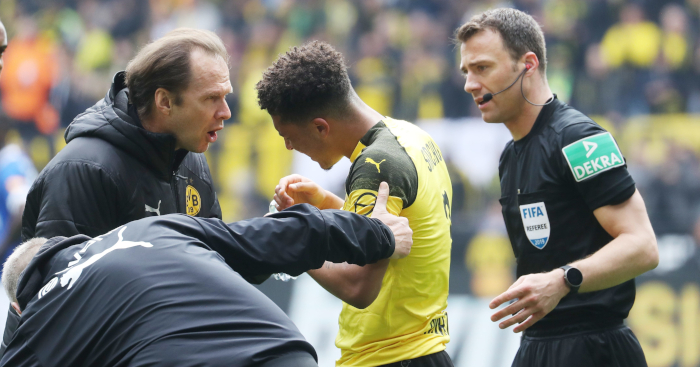 Jadon Sancho had an afternoon he won’t forget quickly as Borussia Dortmund’s title hopes suffered a huge blow with an action-packed 4-2 defeat to Schalke.

Dortmund need to win to move ahead of Bayern Munich into first place in the Bundesliga, with Bayern in action on Sunday.

And Sancho appeared to be setting Dortmund on their way when he produced a brilliant assist to set up Mario Gotze for an early opening goal.

But the England international was hit by a lighter thrown from the crowd while celebrating the goal and required treatment.

Dortmund crumbled to trail 2-1 and were soon down to nine men as Marco Reus and Marius Wolf were shown straight red cards five minutes apart.

Sancho did produce another moment of inspiration with a brilliant nutmeg, but Dortmund could not recover and fell to a damaging 4-2 defeat.