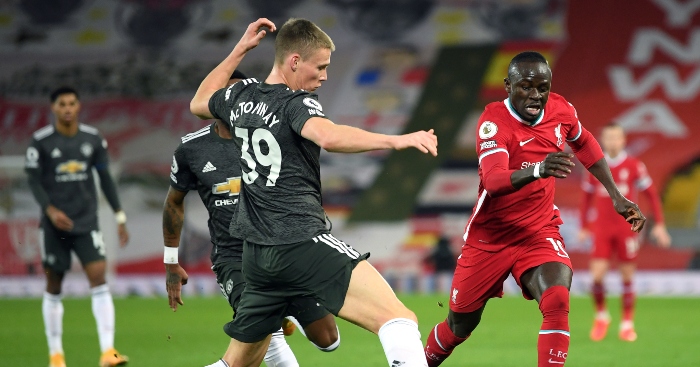 It’s fair to say that the defensive players stole the show during Liverpool‘s goalless draw against Manchester United on Sunday.

Luke Shaw won the Man of the Match award for his display, while Alisson made two brilliant saves to deny Bruno Fernandes and Paul Pogba in the closing stages.

Scott McTominay was also one of United’s standout performers at Anfield, making some vital interceptions and helping to protect the back four.

He was selected alongside Fred in midfield; the duo seemingly having established themselves as the preferred choice in most of the big games during Ole Gunnar Solskjaer’s reign.

The Scotland international also showcased his ability on the ball in the first half, using a brilliant piece of footwork to evade Liverpool’s press when United tried to play out from the back.

He then picked out Fernandes with a cross-field pass, allowing United to launch another counter-attack.

is there any point pressing scott mctominay? pic.twitter.com/dcQWLJHwvZ