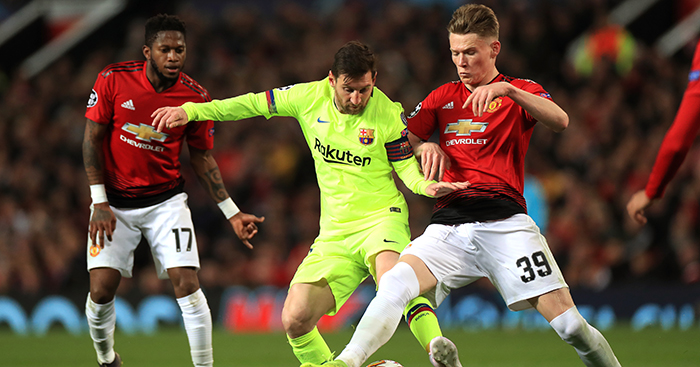 Manchester United were beaten 1-0 by Barcelona in the first leg of their Champions League quarter-final – but Scott McTominay earned plenty of praise for his performance.

With Nemanja Matic and Ander Herrera out injured, United started with McTominay, Fred and Paul Pogba in an unfamiliar-looking midfield, but afterwards Ole Gunnar Solskjaer praised some “very good individual performances” from the trio.

McTominay in particular impressed, winning all of his defensive headers and tackles, regaining possession in midfield but more importantly keeping the ball, too. “He was the one to take the ball down to settle us,” Solskjaer said.

One turn to evade three players towards the end of the first half stood out, but arguably his best moment of the game came when he calmly sidestepped a sliding Arturo Vidal in the United box, sending the Chilean for hotdogs as he carried the ball out from the back.

Watch the brilliant moment below.