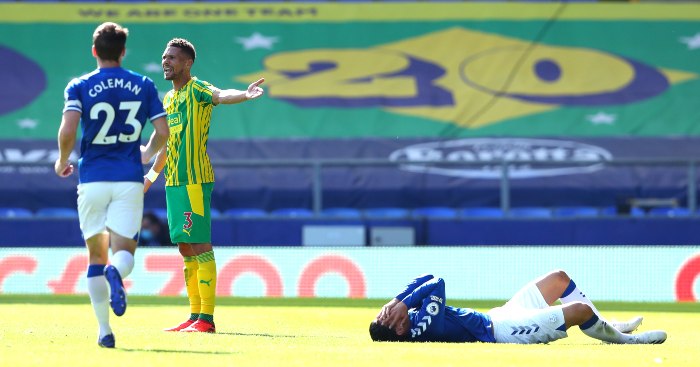 Kieran Gibbs may be one of the last footballers we’d pick out as a bit of a sh*thouse, but the West Brom left-back showed he has something of a mean streak after his red card against Everton on Sunday.

Everton thumped the Baggies 5-2 at Goodison Park, with a crazy few minutes just before half-time proving pivotal to the outcome.

West Brom had taken the lead through Grady Diangana early on, which was cancelled out by Dominic Calvert-Lewin just after the half-hour mark.

James Rodriguez then marked his home debut by giving Everton the lead in the 45th minute, and just moments later Gibbs was given his marching orders after pushing the Colombian in the face.

Footage later emerged of Gibbs being caught walking off the pitch while saying: “I’ll f*cking do it again.”

Seamus Coleman clearly wasn’t impressed by the former Arsenal’s man’s antics, replying: “No you won’t do it again. Who you talking to, you’ll do it again? Hard man. F*cking hard man.”

It goes without saying that we absolutely love this kind of thing.

Gibbs “I’ll fcuking do it again.
Seamus “No you won’t do it again. Who you talking to you’ll do it again? Hard man. Fcuking hard man.”pic.twitter.com/2OsHffdjNX