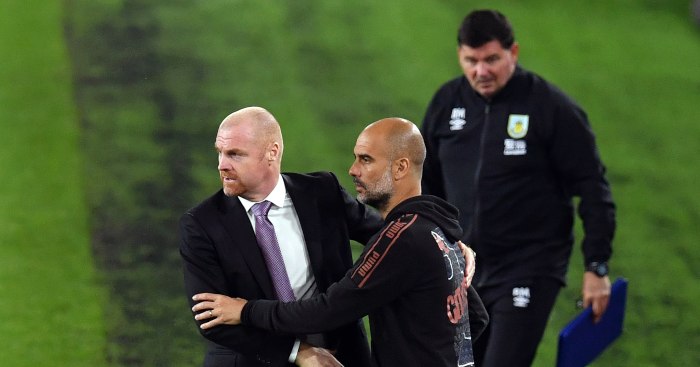 Usually we’d try our best not to fall back on cliches suggesting that Burnley‘s League Cup encounter with Manchester City was very much a clash between old school British football values and a modern European philosophy – but then Sean Dyche shouted, “You spend half your f*cking life on the floor, son,” at Raheem Sterling.

Let’s just be clear, we absolutely love this. Not being able to attend the fixtures of the clubs we support is starting to really ache, so if football is going to be played without fans, all we want is to be able to hear the players and coaches slag each other off.

Sterling wasn’t exactly in Dyche’s good books after scoring either side of half-time to help City secure a 3-0 win at Turf Moor, with summer signing Ferran Torres grabbing the third goal.

The England winger then infuriated Dyche and Burnley assistant manager Ian Woan with a scything challenge on right-back Matt Lowton.

Pitchside microphones then picked up Dyche and Woan verbally laying in to Sterling from the sidelines, and it was absolutely excellent.

Dyche vs. Sterling is everything I needed on a Wednesday evening 😂 pic.twitter.com/RRdeKcPFnd