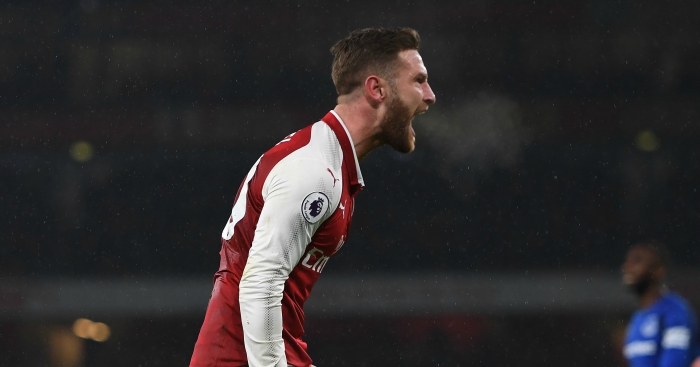 Theo Walcott endured an unhappy return to Arsenal as Everton were beaten 5-1 at the Emirates on Saturday.

Walcott ended a 12-year association with Arsenal last month as he departed for Everton in a £20million deal.

The forward had enjoyed a bright start to his Toffees career, scoring a brace on his second appearance to fire his new club to a 2-1 victory over Leicester City.

But Walcott’s return to north London could hardly have gone any worse as Sam Allardyce’s men were thumped 5-1 by the Gunners.

Aaron Ramsey’s hat-trick, Laurent Koscielny’s header and a debut goal from Pierre-Emerick Aubameyang piled the misery on Everton, who bagged a consolation through Dominic Calvert-Lewin.

Walcott did have a great chance to score with the score at 3-0, only for Shkodran Mustafi to get back brilliantly to thwart his former team-mate.

The Germany international definitely seemed to enjoy this.