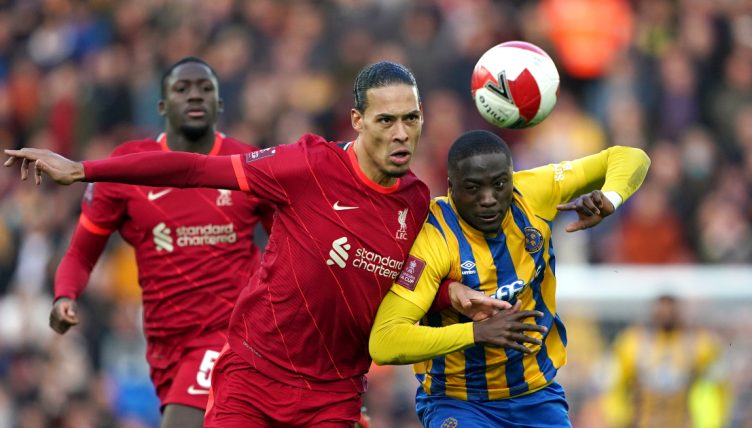 Shrewbury’s Daniel Udoh hit Cristiano Ronaldo’s iconic ‘Siuu’ celebration after opening the scoring for his side against Liverpool in the FA Cup at Anfield.

Liverpool played a heavily rotated team and Udoh tapped in from Nathanael Ogbeta’s cross to give the League One side the head in the 27th minute.

It sent the Shrewsbury fans behind the goal into raptures, and Udoh was elated himself.

He couldn’t help but pull off Manchester United player Cristiano Ronaldo’s famous celebration at their arch-rivals stadium, even including the little finger before jumping up.

A few of his team-mates joined in, all yelling “Siuu” as Udoh jumped.

But by half-time, a great goal from youngster Kaide Gordon and a Fabinho penalty had turned the game around and Shrewsbury found themselves 2-1 down at the break.

Roberto Firmino then came off the bench and scored with a brilliant backheel finish before Fabinho got his second goal of the game in injury time.

Liverpool will be hoping to have a better cup run this season than they have had in recent history under Jurgen Klopp after being knocked out by Manchester United in the fourth round last season.