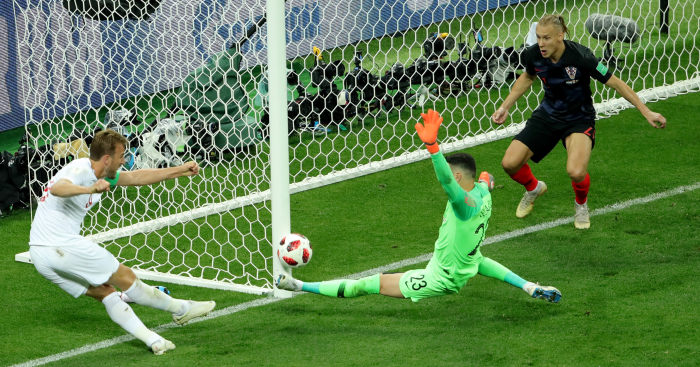 England’s fairytale World Cup journey was brought to a heartbreaking end by Croatia on Wednesday after their extra-time comeback win.

Kieran Trippier had put Gareth Southgate’s men in front inside five minutes with an exceptional free-kick, a lead which England held until the 68th minute – though they could have extended it.

Ivan Perisic levelled things up as a buoyed Croatia controlled the second half, and Mario Mandzukic netted the winner in extra-time to end England’s dreams of a first final appearance since 1966.

One of the key chances for Southgate’s side fell to Harry Kane, who saw an effort saved by Danijel Subasic, before he hit the post from an extremely tight angle, with many supporters feeling a square pass to Raheem Sterling would have been a better option.

However, a slow-motion replay of the incident has since surfaced, showing Kane was in fact set to score, if it wasn’t from an outstanding recovery from Subasic, who in fact diverted the ball onto the post.