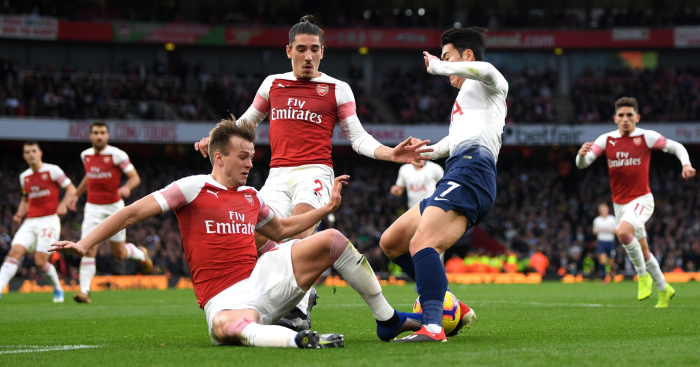 Arsenal may have come from behind to beat Tottenham in an enthralling north London derby – but that doesn’t mean Sokratis Papastathopoulos was going to let Son Heung-min off for what he suggested was a dive to win a first-half penalty.

In a six-goal thriller at Emirates Stadium, Arsenal took the lead after just 10 minutes thanks to Pierre-Emerick Aubameyang’s penalty, but Spurs hit a quickfire double to go into half-time in the lead.

Eric Dier headed home on the half-hour mark before Harry Kane converted a spot-kick of his own to put Spurs in front.

The penalty was awarded after Rob Holding was adjudged to have fouled Son in the area, but the decision clearly annoyed Sokratis.

Second-half goals from Aubameyang, Alexandre Lacazette and Lucas Torreira secured a 4-2 win for the Gunners, but Sokratis was clearly still annoyed at Son once the game had finished.