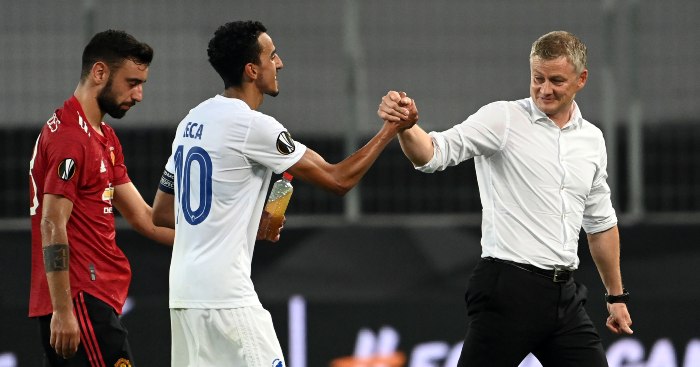 Manchester United may have been made to work hard for their 1-0 victory over Copenhagen in the Europa League quarter-final, but Ole Gunnar Solskjaer was in relaxed mood upon the final whistle.

Bruno Fernandes’ extra-time penalty secured United’s progress to the semi-final after Solskjaer’s side had been thwarted by VAR, missed chances and a brilliant performance by Copenhagen goalkeeper Karl-Johan Johnsson.

Walking off the pitch, Solskjaer joked with Copenhagen midfielder Zeca, who was chatting with Fernandes.

Greece international Zeca was born and raised in Portugal as a Sporting Lisbon fan, but thanked Solskjaer for his work improving United.

Solskjaer pointed at Fernandes and said, “He’s helping,” before joking that he was going to take the midfielder off, adding: “He was giving you the ball all the time.”