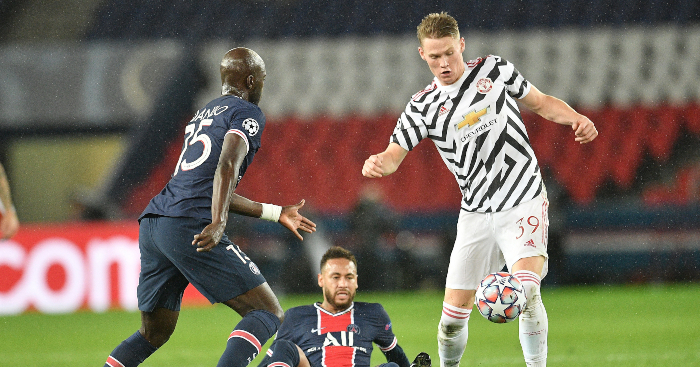 Manchester United‘s 2-1 victory over PSG in the Champions League was remarkable in many ways, not least for Scott McTominay playing the first half “with only one eye”, as Ole Gunnar Solskjaer put it in his post-match press conference.

United have endured a difficult start to the 2020-21 campaign, hitting a particular nadir with the 6-1 defeat to Tottenham at Old Trafford prior to the international break.

To make Solskjaer’s task even harder, they travelled to Paris without Harry Maguire, Mason Greenwood and Edinson Cavani.

But the Red Devils produced an excellent performance to take all three points away from the Parc de Princes.

Bruno Fernandes ensured they went into the break 1-0 up, converting a retaken penalty albeit only after seeing his initial attempt saved.

An own-goal from Anthony Martial saw PSG restore parity in the second half, only for Marcus Rashford to pop up with an excellent late winner from the edge of the box.

After the game, Solskjaer revealed McTominay – selected in midfield ahead of Paul Pogba, Donny van de Beek and Nemanja Matic – played most of the first half having lost one of his contact lenses.

We cannot begin to imagine how sh*t we would be at football if we could only see properly out of one eye.

"Scotty played the first half with only one eye!" 😂👀

Ole Gunnar Solskjaer reveals that Scott McTominay lost one of his contact lenses during the first half in Paris… pic.twitter.com/zKNZ0U8rtf