Watch: Son Heung-min gets sent off for kicking out at Antonio Rudiger 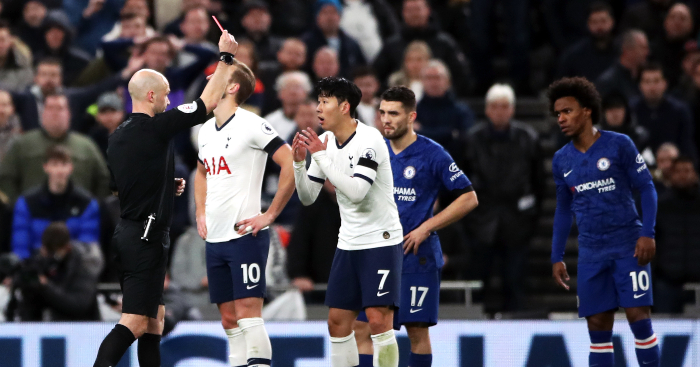 Son Heung-min received a red card on a difficult afternoon for Tottenham in a fiery encounter against London rivals Chelsea after kicking out at Antonio Rudiger.

While much of the build-up focussed on the close relationship between managers Jose Mourinho and Frank Lampard, there was clearly no love lost between the two teams, with Dele Alli clashing with Mateo Kovacic as tempers flared in the first half.

Willian scored twice in the first half, the second of which came from the penalty spot after a rash challenge from Paulo Gazzaniga on Marcos Alonso, to give the visitors a commanding lead at the break.

And Spurs’ afternoon was made all the more difficult when Son was sent off following a VAR review after kicking out at Rudiger.

SON IS SENT OFF 🔴

The Spurs man kicks out at Rudiger and is shown the red card after a VAR check.