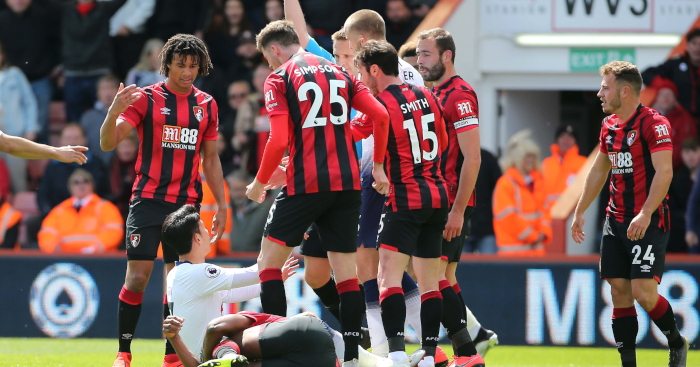 Son Heung-min uncharacteristically lost his head for Tottenham as the forward was sent off against Bournemouth following a clash with Jefferson Lerma – while Juan Foyth was later given a straight red only minutes after entering the fray.

Spurs travelled to Bournemouth for the lunchtime kick-off on Saturday afternoon knowing a win would guarantee a place in the Premier League’s top four and therefore qualification for next season’s Champions League.

But Tottenham suddenly appeared rattled as the half wore on as Eric Dier could have been sent off for a tackle from behind as Bournemouth broke clear with the England international already on a booking.

And Son left his team-mates with a mountain to climb, reacting angrily to a fairly innocuous clash with Lerma.

The South Korean reacts with a shove on Lerma and Craig Pawson reaches straight for the red card.

Pochettino responded to the blow by replacing Dier and Toby Alderweireld, who was also on a booking, with Victor Wanyama and Juan Foyth at half-time.

But Foyth was sent back down the tunnel almost quickly as he appeared from it as the defender received a straight red card two minutes after the restart following a reckless tackle.